Many commuters in Cyprus can now get a greener bus ride, as the first batch of 155 sleek blue and white low emission buses took to the roads for the first time on Sunday.

The fleet of “King Long” Chinese vehicles — all environment-friendly in line with the Euro 6 standard — were launched in the capital Nicosia and the coastal city of Larnaca.

“They drive beautifully, it was a very smooth ride,” one of the drivers at the Larnaca seafront bus station told Xinhua. “Today was the first day and I have absolutely no complaints, neither did the passengers.”

Operated by Cyprus Public Transport (CPT), the fleet is noticeably quieter than older vehicles, cutting noise for passengers as well as in the community.

Prior to the launch, Transport Minister Yiannis Karousos lauded the development as a milestone in public transport on the Mediterranean island.

Besides environmental benefits, an important feature, given the recent COVID-19 pandemic, is the state-of-the-art automated cleaning process.

“Certainly this is an improvement in terms of the quality of the fleet and in terms of safety,” Savva added. “Compared with the previous decade, when we had a mixture of new and older buses, this is a major upgrade.” 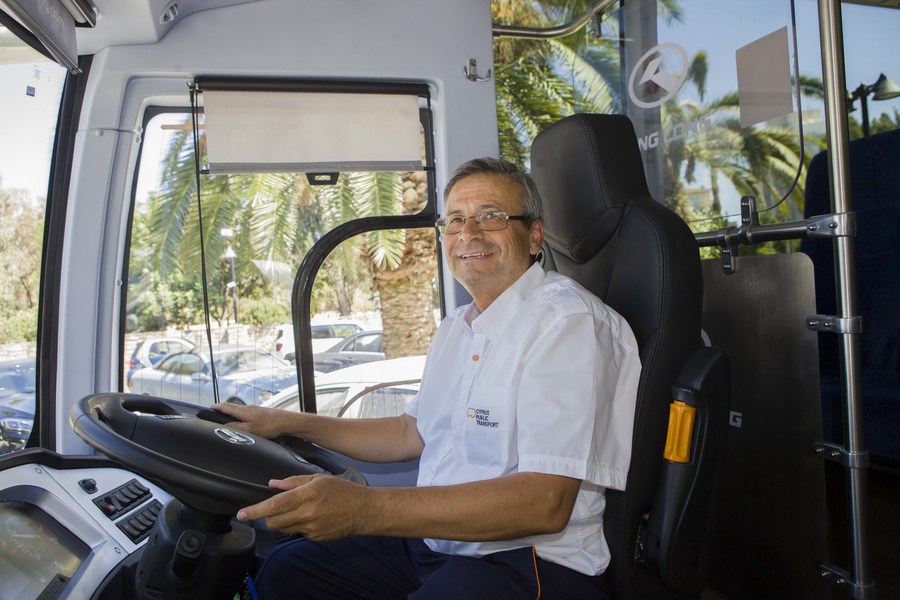 A driver is seen on a new bus imported from China in Nicosia, Cyprus, July 1, 2020. A fleet of brand new Chinese buses will be used starting on July 5 for bus routes in two Cypriot cities, the capital Nicosia and its sister city Larnaca. (Photo by George Christophorou/Xinhua)

In Larnaca, which is currently basking in summer temperatures of 34 degrees centigrade, the reception was enthusiastic, given the fleet also boasts air conditioning, WiFi, USB charging points, and mobile apps for real-time information during the journey.

“Oh yes, this is a big improvement,” laughed student Ogwang Baba. “It’s first-class travel which is a different planet to what we have known. They are also good for folks with mobility problems, especially the old people.”

In announcing the start of the routes, the CPT consortium pledged a safe bus experience, with all vehicles being disinfected every night.

The Cyprus Green Party welcomed the news that the fleet is equipped with eco-friendly, low-emission Euro 6 engines that minimize the environmental footprint.

“We welcome any change that will bring over better quality public transport for the island,” Efi Xanthou, deputy president of Cyprus Green Party, told Xinhua.

“We can only hope that the new-era opening for public transport in Cyprus will actually increase its use by residents and visitors of the island,” she added.

CPT, a consortium made up of Malta Lines and a local transport company, Kapnos Airport Shuttle, has been licensed to run bus services for the next decade.