The Statistical Service estimates that the total amount of municipal solid waste generated in Cyprus in 2019 stood at 566 thousand tonnes compared to 562 thousand tonnes in 2018, recording a small increase of 0,73%. 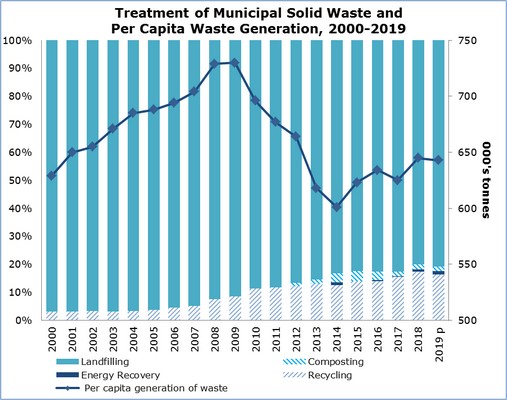 Municipal Waste: is waste collected by or on behalf of municipalities. It includes household waste and similar waste as well as waste originating from commerce, trade, small businesses, office buildings and institutions (schools, hospitals, government buildings). It also includes: bulky waste and yard waste, leaves, grass clippings, street sweepings, the content of litter containers, and market cleansing waste, if managed as waste. Municipal waste is collected from door-to-door through traditional collection (mixed household waste) and fractions collected separately for recovery operations (mainly for recycling purposes, through door-to-door collection and/or through voluntary deposits). It also includes waste similar in nature and composition which: 1) is collected directly by the private sector (business or private non-profit institutions), not on behalf of municipalities (mainly separate collection for recovery purposes) and 2) originates from rural areas not served by a regular waste service, even if they are disposed by the generator. It excludes waste from municipal sewage network and treatment and municipal construction and demolition waste.

Recycling: is defined as any reprocessing of material in a production process that diverts it from the waste stream, except reuse as fuel. Both reprocessing as the same type of product and for different purposes is included. Direct recycling within industrial plants at the place of generation is excluded.

Composting: is defined as a biological process that submits biodegradable waste to anaerobic or aerobic decomposition and that results in a product used on land or for the production of growing media or substrates.

Incineration: refers to the thermal treatment of waste in an incineration plant in order to reduce the volume and the hazardousness of the waste and to obtain a still product that can be disposed of.

Energy recovery: refers to the incineration and co-incineration of waste in power stations and industrial facilities such as cement kilns so that the resulting energy can be used to generate heat or electricity.

Landfill (disposal site): is defined as deposit of waste into or onto land, including specially engineered landfills, and temporary storage of over one year on permanent sites. The definition covers both landfills in internal sites (i.e. where the generator of waste is carrying out its own waste disposal at the place of generation) and external sites.